The Mission of the Carnegie Library of McKeesport is to enhance the quality of life for all individuals in its community by serving as an information resource center.

The Carnegie Library of McKeesport is a member of the Allegheny County Library Association and the EINetwork. The Library is funded by or receives in-kind support from the Commonwealth of Pennsylvania, the Allegheny Regional Asset District (RAD Tax), McKeesport, White Oak, Mckeesport Area School District, and the City of Duquesne. Click to see how you can support the library.
Board of Trustees

Friends of the Library

The Friends is a 501-c-3 tax-exempt organization which accepts donations for and at times organizes fundraisers to benefit the library.

It has stood at the top of a hill for a century. The outside of the cleaned Carnegie Library of McKeesport, an imposing stone structure, is a visual symbol of the strength and importance of the events that have taken place inside this fine building. Events that have given the community an enduring legacy – children exploring the wonder of books, community groups gathering for lectures and events, friends enjoying lively dances and theatrical productions, and civic organizations meeting and making decisions — all of which have helped shape and touch the lives of many individuals. The Library itself began as a result of the efforts of one civic organization: The Women’s Club of McKeesport. Newly formed in late 1898, the Club’s first goal was to create a library for McKeesport. Knowing of his interest and support of other library projects, Club Secretary, Mrs. Fred Crabtree wrote to Andrew Carnegie asking for his help. After many pleas over the next year, he responded with a gift of $50,000 to build the building.

His gift was made with the understanding that the City of McKeesport would furnish a proper site for the building and provide for its maintenance and operation. A far corner of the Evans Estate, bounded by what are now known as Carnegie, Library and Union Avenue was chosen as the location. On February 11, 1900, an ordinance was passed by the Council of the City of McKeesport accepting Mr. Carnegie’s donation and appropriating $3,000 annually for the operation of the library. William J. East, a noted Pittsburgh architect, designed the building that is recognized as one of the area’s architectural treasures. On July 15, 1902 President James Evans and Mrs. Fred Crabtree of the Board of Trustees opened the Library’s doors.

The Library has grown considerably from the collection of 3,000 books Librarian Emily Kuhn first offered the community in 1902 to the present total of 110,134 books. The Library was named a historical landmark in the late 1970’s. Ruth Richards was the director from 1963 to 1984. Recent renovations include the installation of nearly 16,600 Spanish roof tiles in keeping with the original design of the building. Since the 1990’s additional changes and renovations have included an elevator, handicap accessibility, wiring, computers and the establishment of three branch locations. The White Oak Branch opened in 1992 at Heritage Hill Park. The Elizabeth Forward Branch operated from July 1998 to May 11, 2013. The Duquesne Branch opened in 2001 in the Duquesne Education Center. Jo Ellen Kenney was the director from 1989 to 2013. Kelley Moten was the director from mid-2014 through May 2015. Matthew Stefanko was the director from June through December 2015. Judith Gaydos was the director from June 2016 through August 2017. Colleen Denne was the director from January 2018 through August 2020. The expanded parking lot with 30 spots opened on Aug. 9, 2019. Read an article by Lu Donnelly in Western Pennsylvania History magazine’s Winter 2014-2015 issue. Listen to Matt Stefanko’s interview with Jason Togyer about the library. Read the article with Colleen Denne in 2/5/18 Tube City Almanac.

The Board of Trustees, Director and Staff are proud to present the best library around — the Carnegie Library of McKeesport — for the next hundred years. Below is a poster for an ox roast event that was held several years ago: 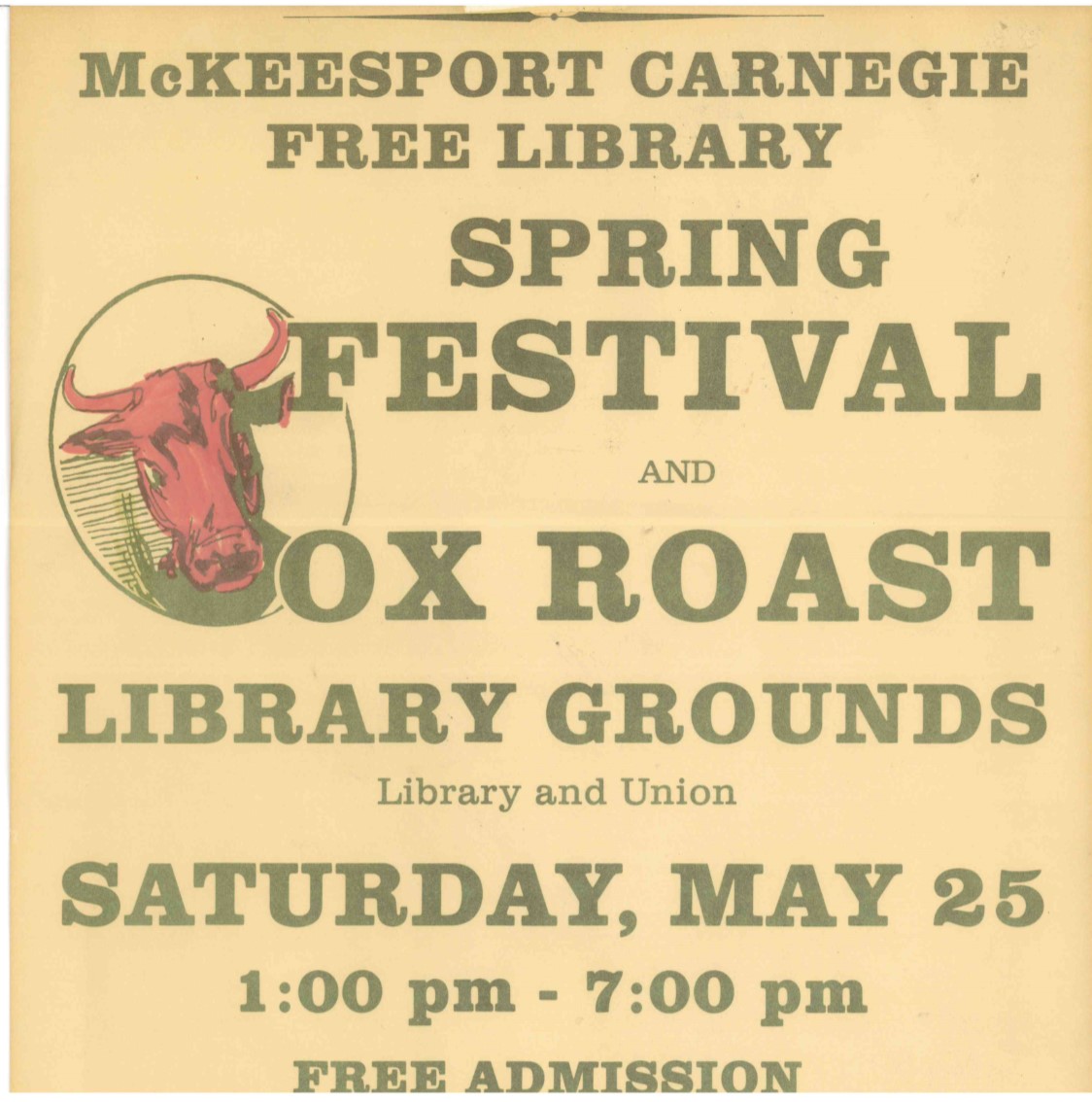 Click to see Internet Use Policy Notice concerning wireless network: Our free wireless network is not a secure network. We recommend that you do not use this network for the transfer of sensitive data, such as credit card numbers or bank account numbers, even while using SSL encryption built into your web browser. This data would be vulnerable during transit on the network, where any person in the area running simple software on a wireless laptop computer could intercept the data. Remember that anything wireless is inherently less secure than anything with wires. Carnegie Library of McKeesport accepts no liability for any loss of privacy or data you may experience while using our network, wired or wireless. This is not a complete list of policies.
Job Openings 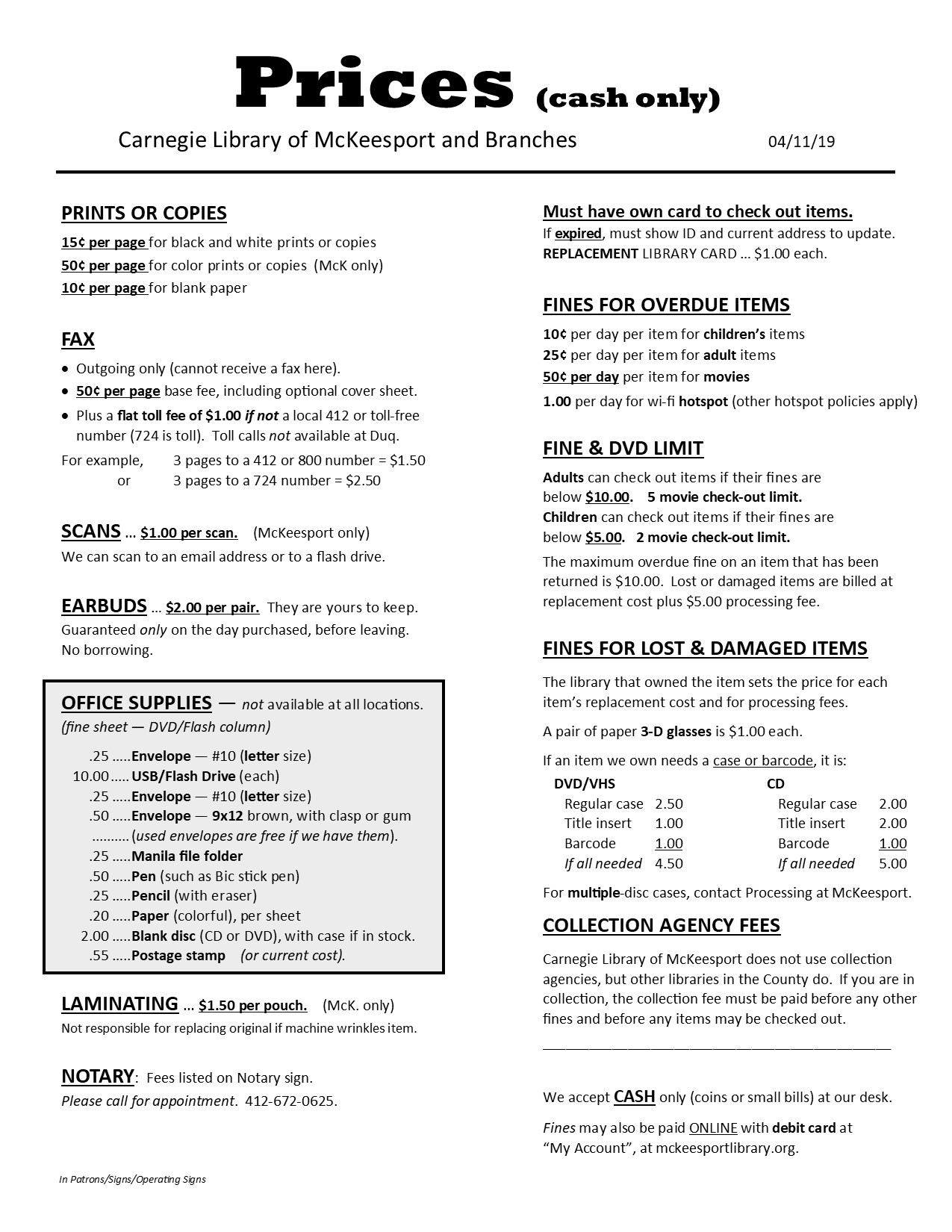